Migration from java 8 to java 9

Setting up a consistent environment for your build is as simple as placing these settings into a gradle.properties file. The configuration is applied in following order (if an option is configured in multiple locations the last one wins):

Tell build.gradle files that you will be using java 9

You don't need to manually change the build.gradle files, they are already modified

To check all Java versions installed

Open ~/.bash_profile in any text editor and add:

Save and close the file.

Open a Terminal and run the source command to apply the changes:

Now we can check the value of the JAVA_HOME variable:

To set JAVA_HOME in Linux for a single user, we can use /etc/profile or /etc/environment (preferred for system-wide setting) or ~/.bashrc (user specific setting).

Open ~/.bashrc in any text editor and add:

Save and close the file.

Run the source command to load the variable:

Now we can check the value of the JAVA_HOME variable:

Open Command Prompt and check the value of the JAVA_HOME variable:

There’s a lot of code in Java SE that’s actually Java EE related. It ended up in these six modules:

For various compatibility reasons (one of them being split packages, which we will look at next), code on the class path does not see these modules by default, which leads to compile or run time errors.

Java’s standard library isn’t exactly small and lightweight. In the course of the past 20+ years, many features have been added to it, mostly because at the time it was thought that it would be a good idea if Java supported a particular technology out-of-the-box.

One of these was support for XML-based web services. When Java SE 6 was released in December 2006, XML-based web services were popular, so the developers of the Java language thought it would be a good idea if Java would have support for calling web services as a standard feature. It was decided to add the necessary APIs, that were originally developed as part of Java EE, to Java SE. Among these were JAX-WS (Java API for XML-Based Web Services) and JAXB.

With today’s trend towards microservices, it’s important that the Java runtime environment is small and lightweight, so having a large runtime library with built-in support for every possible technology isn’t as advantageous anymore.

Therefore, a proposal was made in JEP-320 to remove the Java EE and CORBA modules from the JDK.

This means the following:

Adding JAXB as a separate library

The proper solution is to add the JAXB as a dependency to your project – in the same was as you would have done long ago, before Java 6.

The official JAXB API dependency can be found in the Maven Central repository, so if you’re using Maven, you’ll want to add the following dependency to your project:

Like many Java EE APIs, JAXB is just an API – a specification of a number of classes and interfaces. To use JAXB you not only need to have a dependency on the API, you also need to make sure that an implementation of the API is available in the runtime environment of your program.

You have several options at this point. You can use the reference implementation of JAXB, which was what was formerly included in the JDK, or you can use an alternative implementation such as EclipseLink MOXy.

There are Maven artifacts available for the official JAXB reference implementation.

he JAXB Users Guide refers to the following artifact:

EclipseLink MOXy is an alternative implementation of the JAXB API that you might want to use. To use this, include the following dependency in your project next to the dependency on javax.xml.bind:jaxb-api:

One of the module system’s biggest selling points is strong encapsulation. It makes sure non-public classes as well as classes from non-exported packages are inaccessible from outside the module. First and foremost, this of course applies to the platform modules shipped with the JDK, where only java.* and javax.* packages are fully supported. Most com.sun.* and sun.* packages, on the other hand, are internal and hence inaccessible by default.

The most obvious and sustainable fix for dependencies on internal APIs is to get rid of them. Replace them with maintained APIs and you paid back some high-risk technical debt.

If that can’t be done for whatever reason, the next best thing is to acknowledge the dependencies and inform the module system that you need to access it.

Access to certain internall JDK apis has been restricted

Luckily exists and alternative in the accessible API for com.sun.net.ssl.internal.ssl.Provider, just replace:

In this case, we must make the package accessible by adding the following compilers args to the build.gradle file:

Should the IDE compiler complain about illegal access to internal API, it can be solved in Settings > Compiler > Java Compiler > Override Compiler parameters per module. The following parameters are required:

Should the IDE compiler complain about illegal access to internal API, it can be solved in:

and make them explicitly indcluded vis the right arrow in between the boxes. 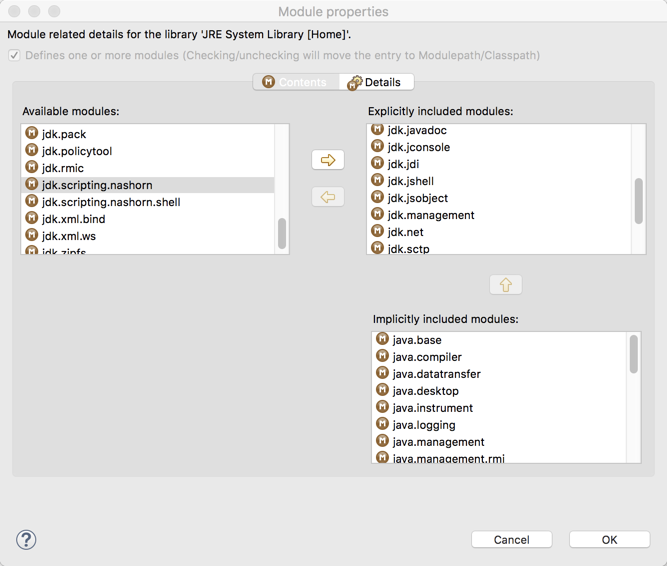 By clicking the Add button in the Details tab > Added exports > the following window will show up:

The following modules must be added: